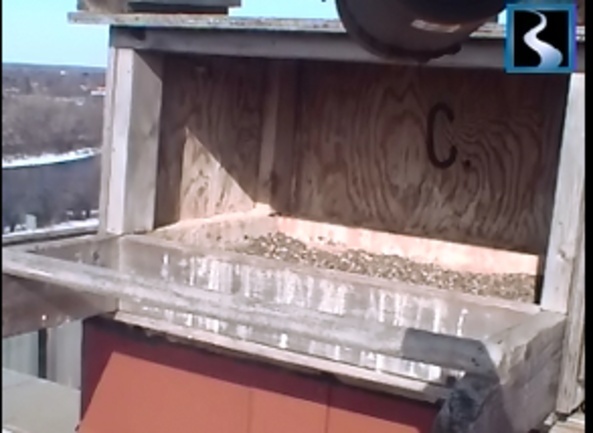 We now know who this young lady is
Mary Ellen 11/X B/R 2012 hatch from Queens Bluff MN. she was the young girl that was hanging out at Black Dog plant in January and February til Mandy Rose showed up and chased her off I'm so glad to see that she is alright Mandy Rose is a real mean falcon when it comes to her man & nest

Thanks for that information Kittenface, But she is very young, if she stays it will mean no eggs here this year.

But she is a pretty Young Girl

The two eyasses were banded on June 20 by Amy Ries of the Decorah, Iowa-based Raptor Resource Project. The eyasses were brought to the ground, examined for health and sex, and had aluminum identification bands attached to their talons. The band numbers will be recorded in the Midwest Peregrine Database so they can be tracked in the future. Along with receiving bands, the birds were named by 2nd grade students and a 4-H group who attended the banding. A female was named Patricia (band B/90) and a male was named Lucky (band 92/N).
_________________
Het leven is soms veel te kort,geniet ervan en durf te leven!