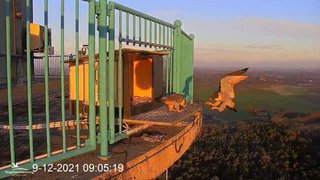 UPDATE - 22nd August 2018 - The current situation with Lady and Dad Sea-Eagle and their chicks.

Up until Sunday, everything was progressing normally with this season. Yes, there has been some sibling rivalry (elder chick, SE21 pecking younger SE22), however, with the chicks reaching their one-month milestone, and multiple food items being delivered each day, we were optimistic that they would both survive.

Unfortunately, apart from a brief visit today (no food), dad has not brought any food or visited the nest area since Sunday. This is highly unusual and definitely unexpected. At this critical time, the parents (even when we don't see on camera) are watching the chicks. Generally, at this stage, the lookout duty lies with Lady, with Dad taking the role of the hunter.

Lady has taken time away from the nest to catch one small fish, Monday 20th and Tuesday 21st (August), returning to the nest to feed. As viewers are well aware, with the previously mentioned sibling rivalry, SE22 does not usually get to eat until SE21 is full. Over the past few weeks, that meant that SE21 would always get the first food delivery. Subsequent deliveries were shared between both but only when SE22 made his/her way to the eating area. Even when there were two food deliveries today, SE22 did not attempt to feed. The result is that he/she has not eaten since Sunday. It is very unlikely that SE22 will last another night without food.

What's wrong with Dad? There was a poorly judged landing to the nest in the early hours of Monday 20th August. Was he injured? Cathy, one of our ground observers, saw Dad sitting at the river roost yesterday and again today, not moving around much (not fishing). Unfortunately, while Cathy was at the river today, she observed a sub-adult flying near the reserve and the river. We can only speculate that there may have been an altercation between Dad and the intruder. To be clear, we can't confirm this. Perhaps Dad is staying away to distract the sub-adult? Perhaps he actually was injured? We simply don't know. The fact is, he has not provided any prey items since Sunday. Agewise, we believe that he is at least 16.

So, what do we do now? There is a firm non-intervention policy associated with this nest. We are privileged to be allowed to unobtrusively film the Sea-Eagles during their nesting season. We are NOT allowed to interfere with the nest, breeding/nesting outcomes or the adults who are protected under national and state legislation. In saying all that if an injured bird is "on the ground" we can transport to a vet (or wildlife carer). The 2012 nest, where we were granted permission to intervene (man-made issue with fishing line) was accessible via cherry picker; this nest is not.

Our beloved Dad, what can we say? We want him to be ok. He is flying around, so we can't "rescue" him. All we can do is hope and pray that he recovers soon.

Is there anything positive out of all this?
Well, SE21 is thriving. Lady has proven herself able to provide for at least one chick without assistance from her partner. For that, we are thankful.

Lastly, for those who don't want to watch anymore and are upset by what they've seen? Please don't assume that we are unaffected by these events. This is our tenth season, of course, we become attached! Nature can be awfully cruel sometimes. We've also seen many beautiful things. Did anyone ever think that we'd get to see little Sea-Eagle chicks hatching, all live via the internet? We observed Dad meeting and courting Lady after we lost Mum. Just recently, we've seen Dad feeding Lady while she was brooding her chicks.

We'd like to thank our moderators for looking after chat and Facebook, doing a fantastic job keeping everyone in the loop, also our dedicated viewers for standing by us when things get tough. Thank you to our note takers for documenting all the nest events and camera operators for keeping us on the air. Also a huge thank you to Cathy for standing around at the river roost these past two days to check on Dad and give us all updates.

Thank you, everyone, for your concern, prayers, best wishes during this time.

A sad message update Thursday 23. We have turned off live streaming for the moment on the main nest view. A big fish was brought in by Lady and SE 21 has fed well. SE 22 has been conditioned to drop straight into a submissive posture. Although SE 21 received a massive feed, with no competition from the smaller SE 22, 21 proceeded to attack 22, grabbing its head and shaking vigorously. We feel this is very confronting to watch live. This behaviour has not been observed before and is being recorded for observation later. It appears that 21 has in fact killed or seriously wounded 22.
The female has made no effort to intervene and is attempting to brood both now.
Our male is still not bringing any food though has been seen several times.
We shall keep you all informed as we can see what is happening.
So distressing - Life in the Raw
Judy Harrington 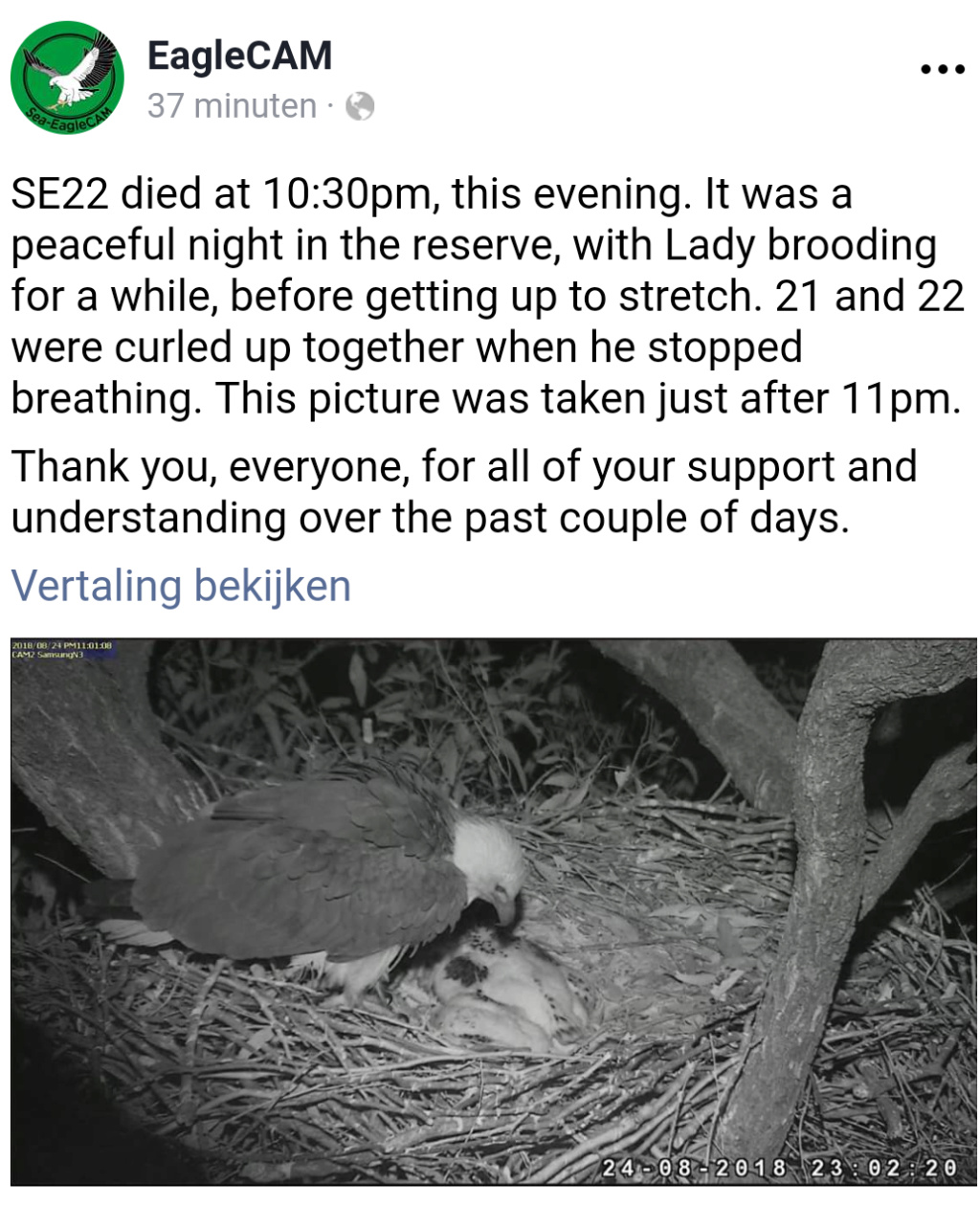