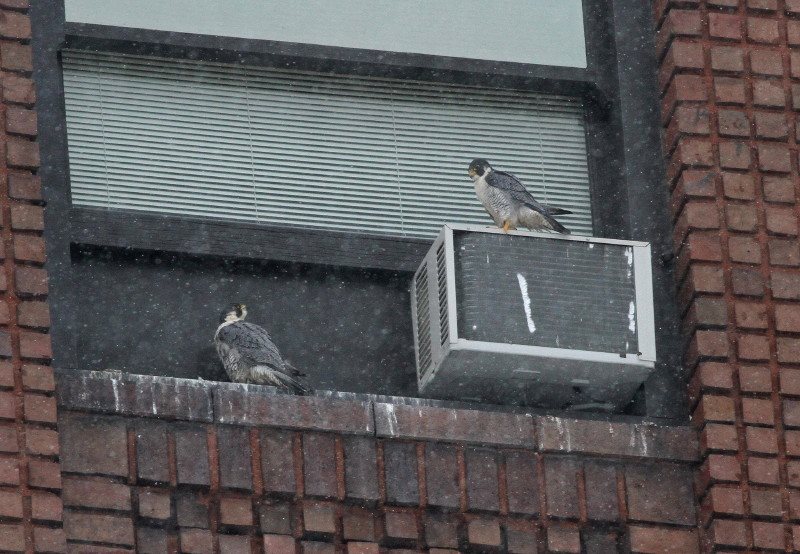 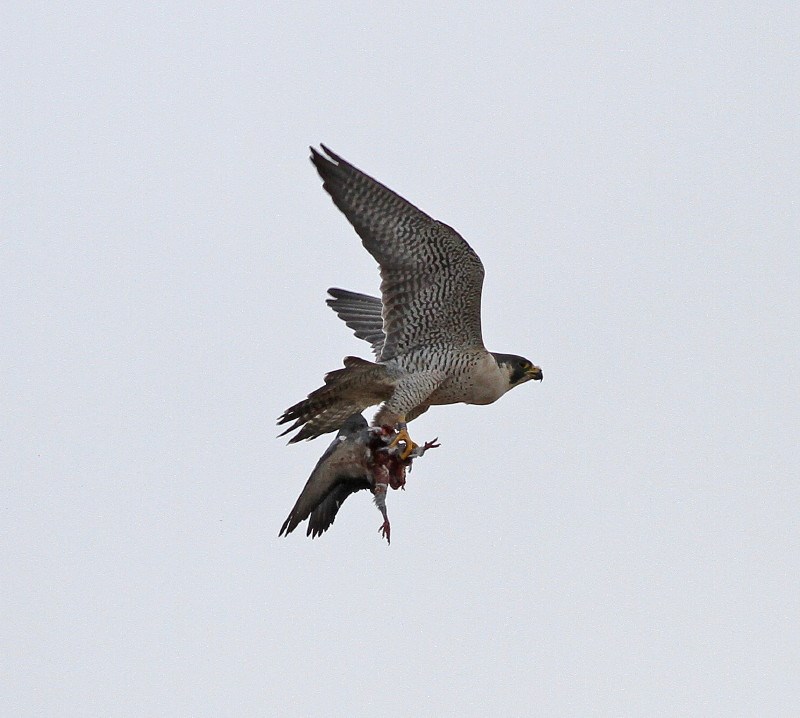 Via hun facebook.
We've made several visits to Canton without a great deal of action or news to report, but wanted to share a couple of recent sequences. Oftentimes, even although the winter provides better odds of seeing a hunt/capture in terms of the limited daylight hours and a peregrine's need to hunt, the flip side is that peregrines will hunt in the wee hours of first light and/or even in the dark if there is sufficient lighting from other sources. There have been reports of peregrines known to hunt migrating birds around the Empire State Building at night, for example, since the lighting emanates from the building and city and provides a good opportunity for them. Also, peregrines tend to roam more in the off-season and have been known to avoid over-hunting the territory surrounding their nest site by seeking alternative places, which also serves the purpose of expanding prey variety. Recent days have been dark, for the most part, so despite the graininess of these images we thought the content could be interesting to share, as it is our purpose to share our experiences and observations rather than to focus on the photography. There are three separate parts to this post: First, just a few shots of a transitional plumage cooper's hawk that has been passing through the area, often drawing the attention of Mystic and/or Mo. The pair has reacted differently at different times, as we have seen heightened aggression on occasion where Mystic and/or Mo have gone into an intense "drive-out" mode that is hostile and likely could result in injury to the cooper's hawk if they catch up to it or if it hangs around too much. On this day, however, Mystic was out and Mo was not too invested in the cooper's hawk's activities, just sounding a passive "kekk" vocalization as he perched with a full crop when the cooper's hawk flew into his view, but not moving a muscle to chase after it. Another sequence shows a portion of Mystic's local hunting of pigeons, as she singled one out, but it was able to out-maneuver her (further described in the pics in the sequence). And a third theme is represented in this post as Mystic seemed keyed in to hunting (and had no visible crop), but rather than seeking live prey she tuned into stored prey remains. Peregrines cache food often, which can serve to help them to sustain themselves when hunting conditions are poor, or can help them to build their reserves when they are able to be successful hunting with minimal effort. One issue with this is that as the temps are well below freezing the stored food won't be consumed when it is frozen, so they may choose to eat it quickly before it would freeze or would have to wait for it to thaw. The cache behavior is another factor as to why we aren't always fortunate enough to be able to see the pursuit of prey just by spending time at the site, even when one or both obviously need to eat. This is also another reason that we greatly appreciate the times when we are able to see their incredible hunting expeditions.
Mystic 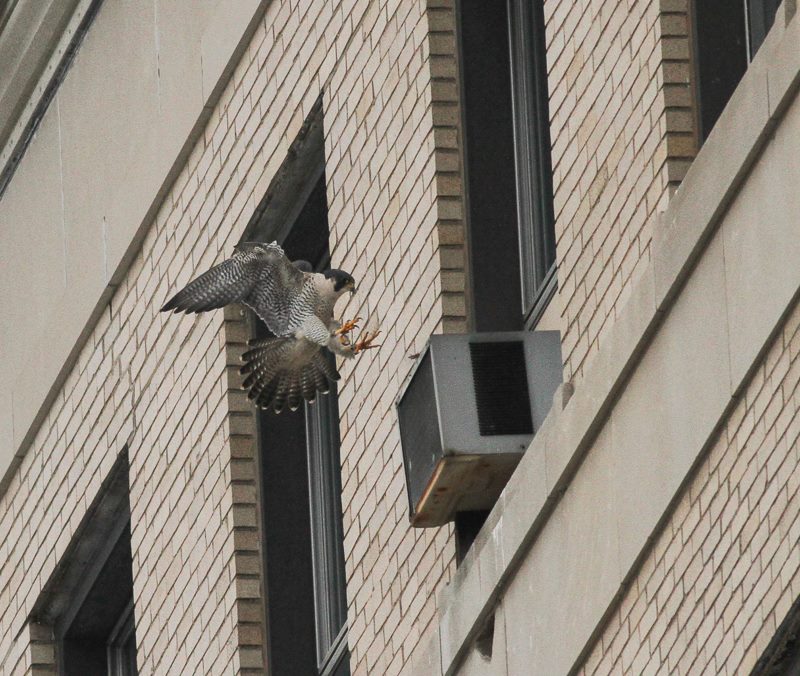 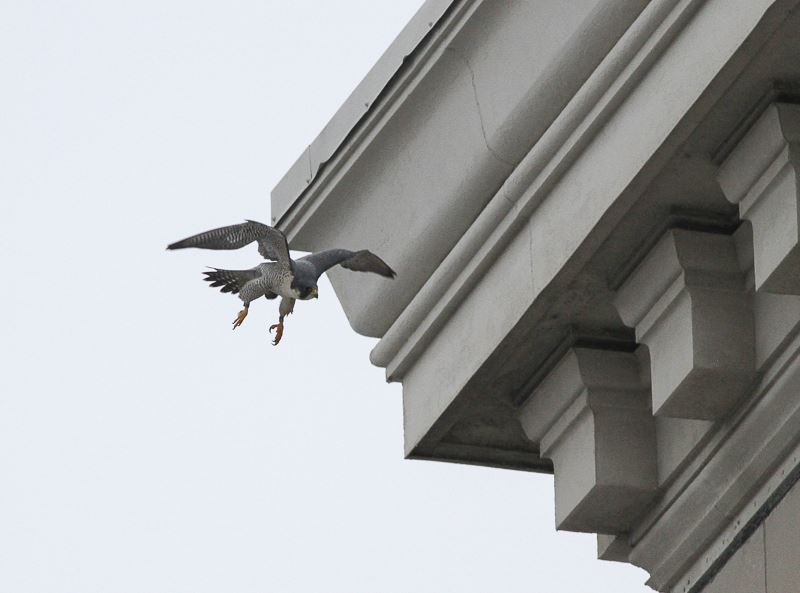 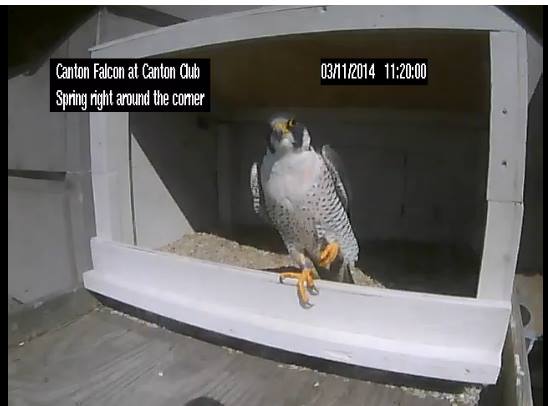 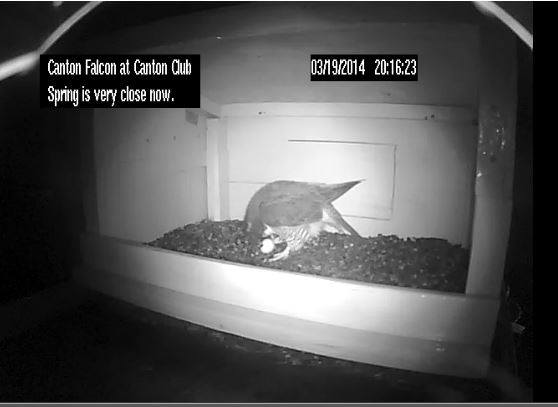 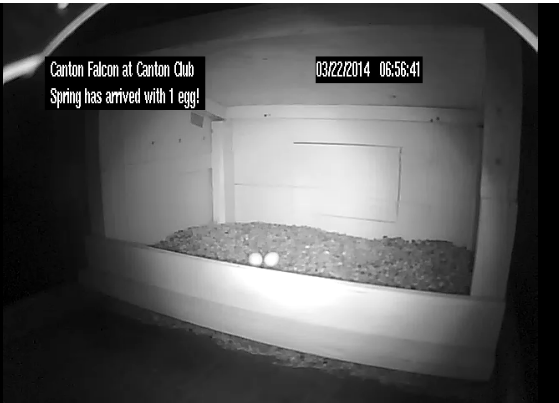 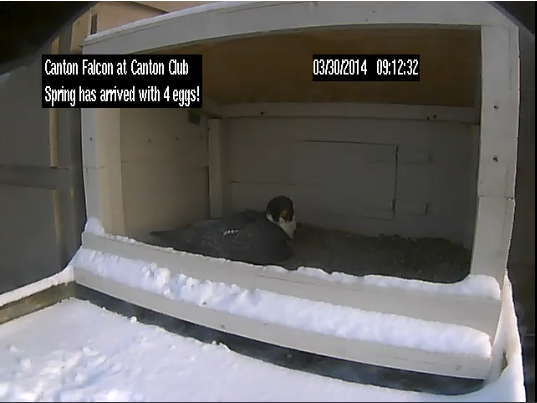 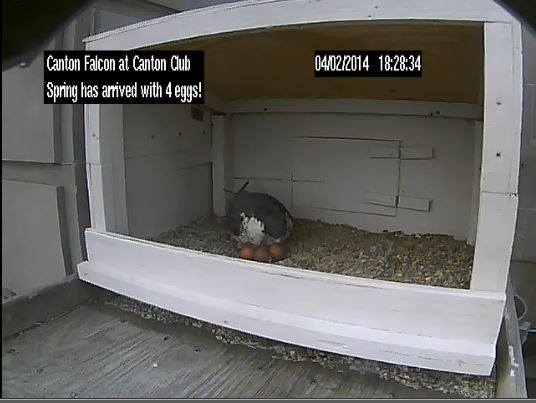 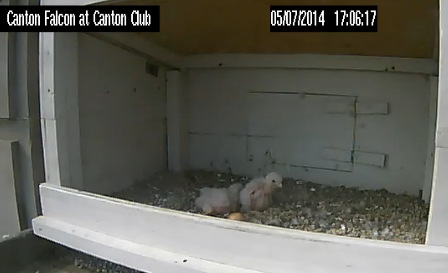 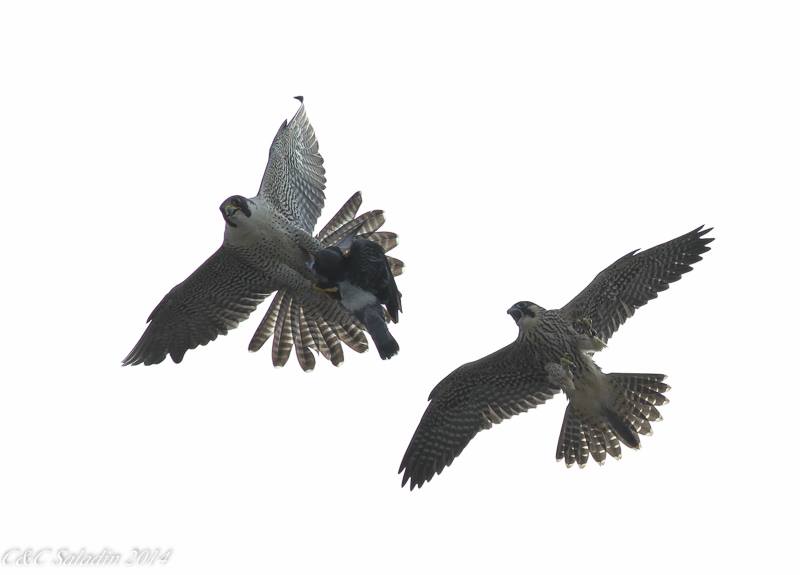 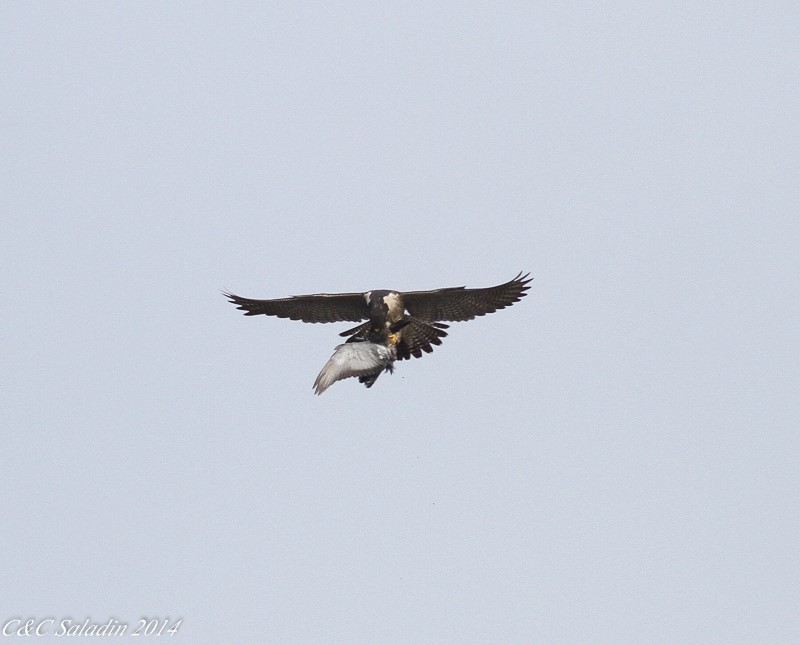 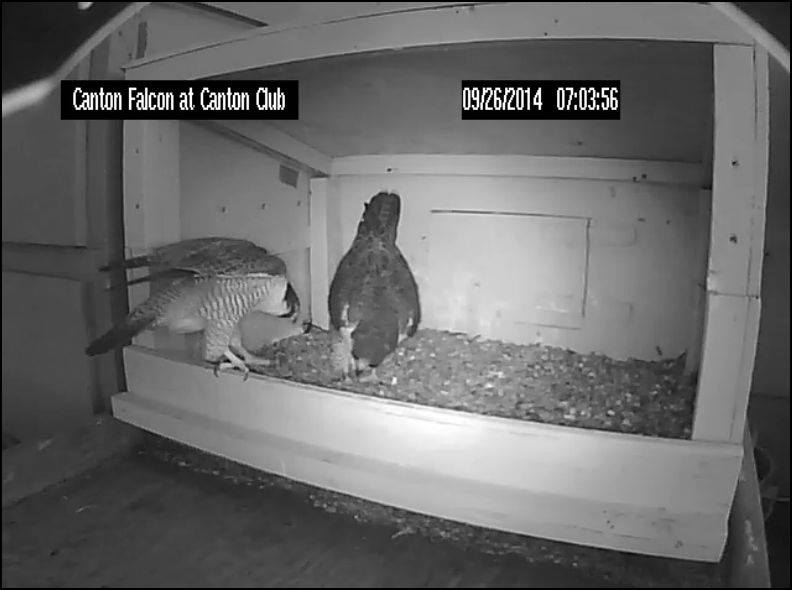 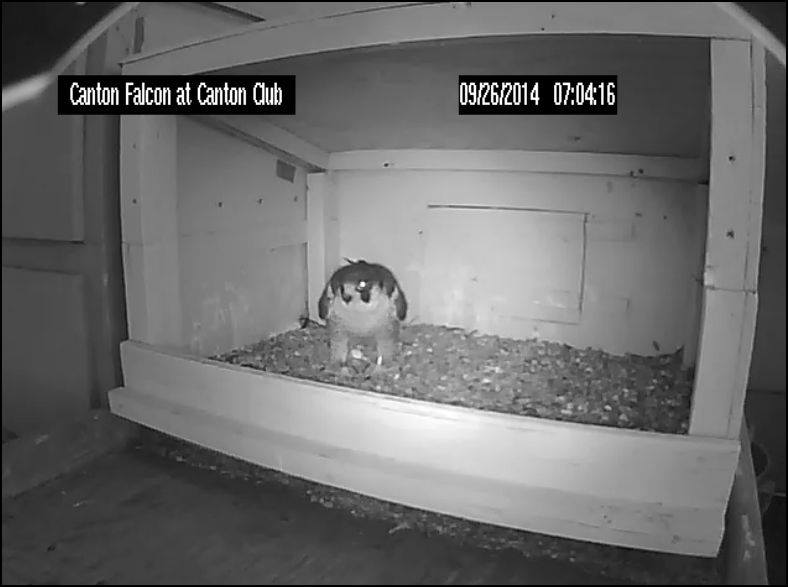 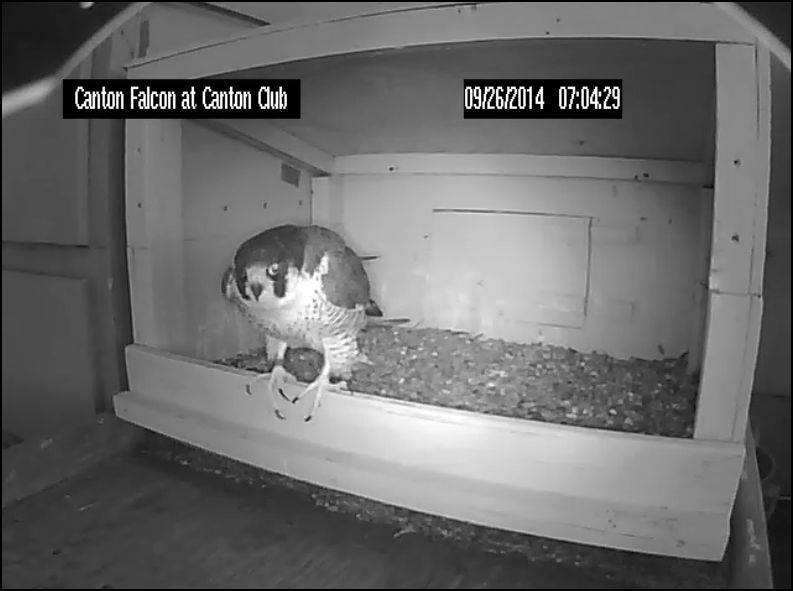 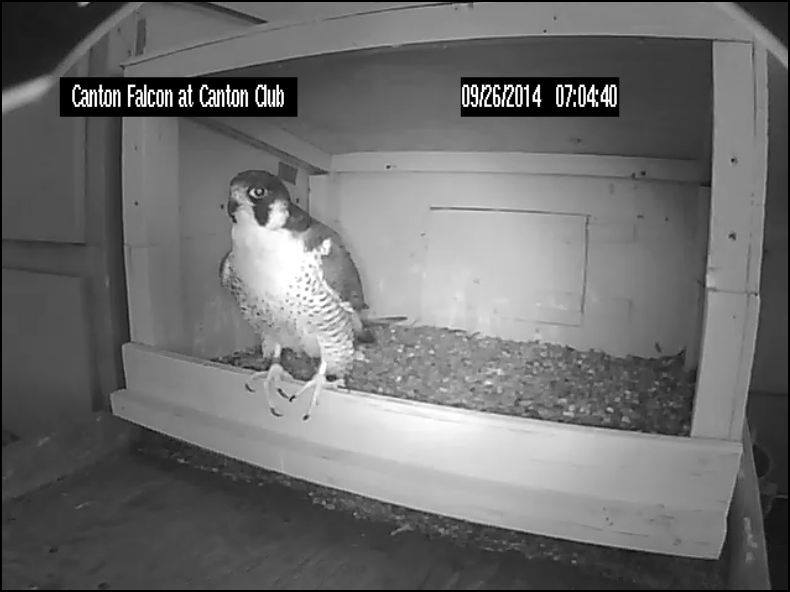