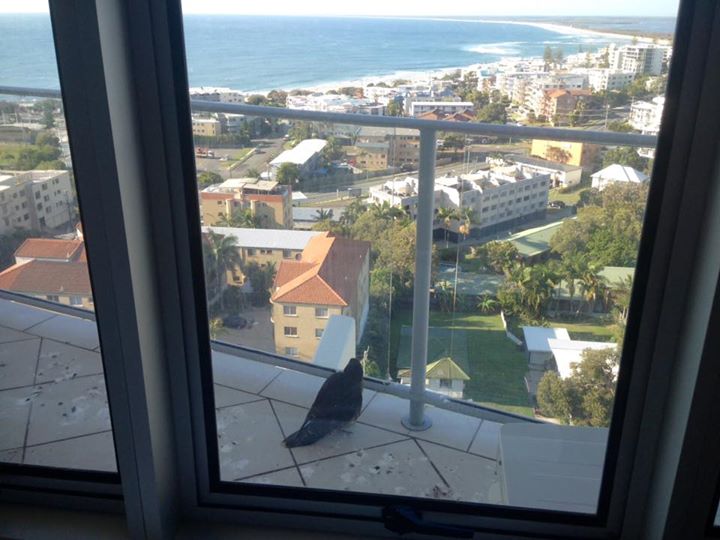 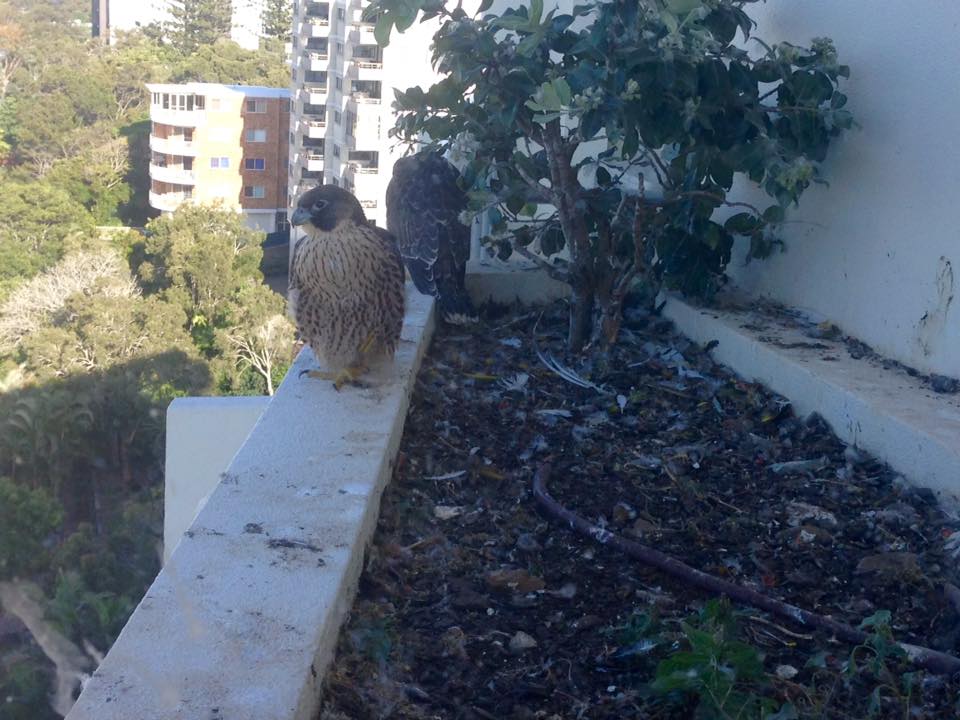 Tekst en foto van Robyn
So now we can fly, but how do we get back up there?? 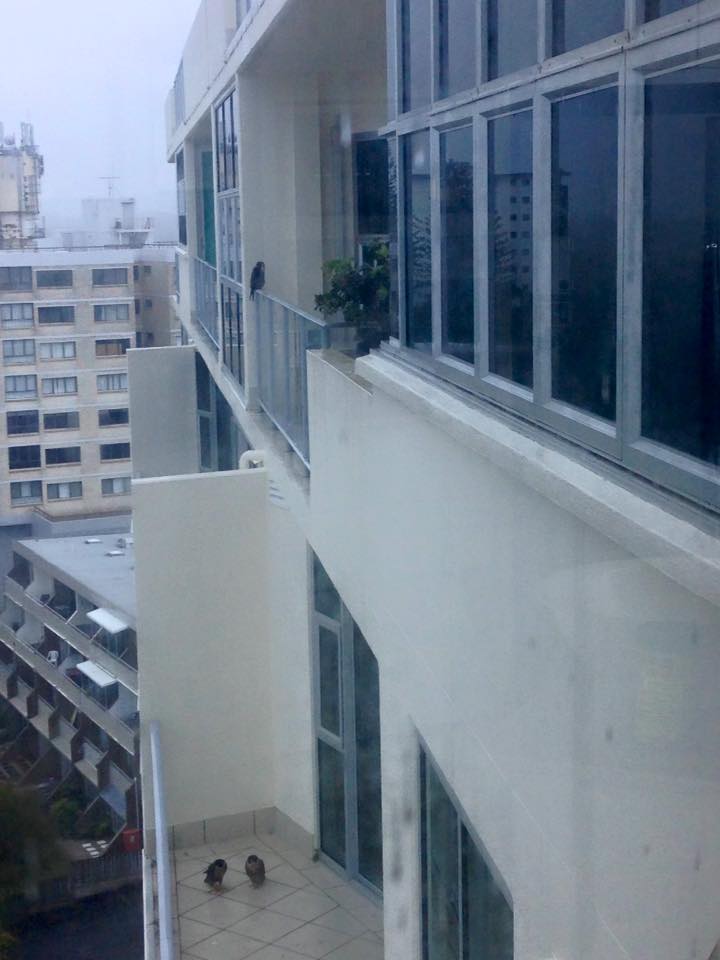 Sadly, last night we found one of the chicks had died on our roof terrace. All the chicks were gone yesterday, but this morning there were two back sharing rainbow lorikeet for breakfast. 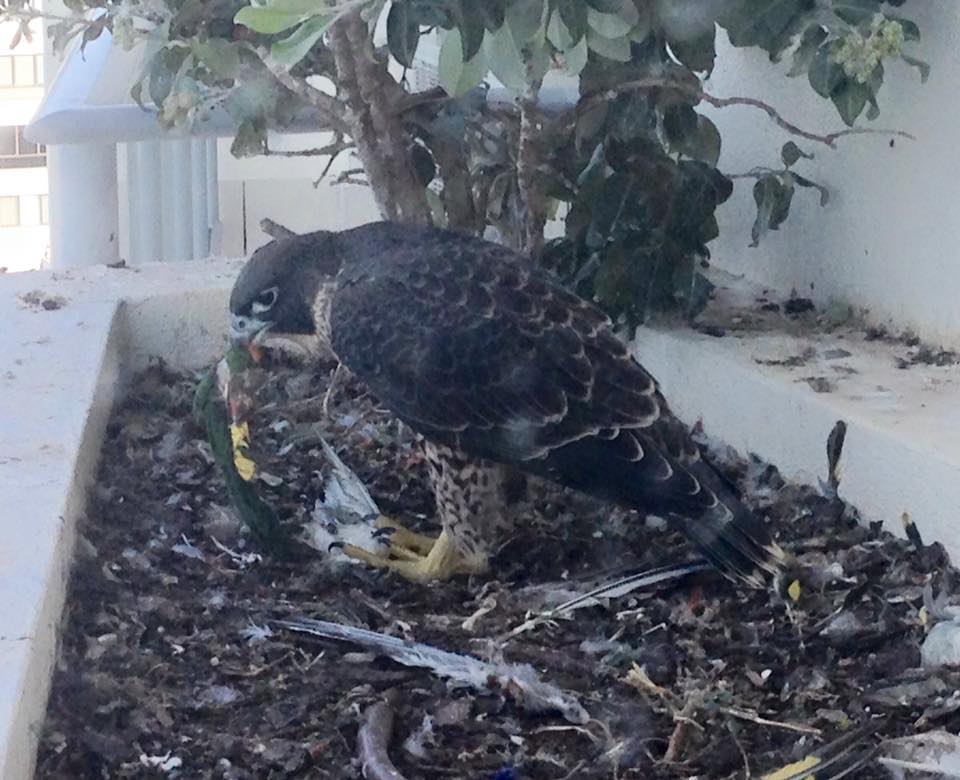 Bericht en foto van Robyn
Popped the blinds up this morning to the feeling that I was being watched! Emily taken up a new viewing position! 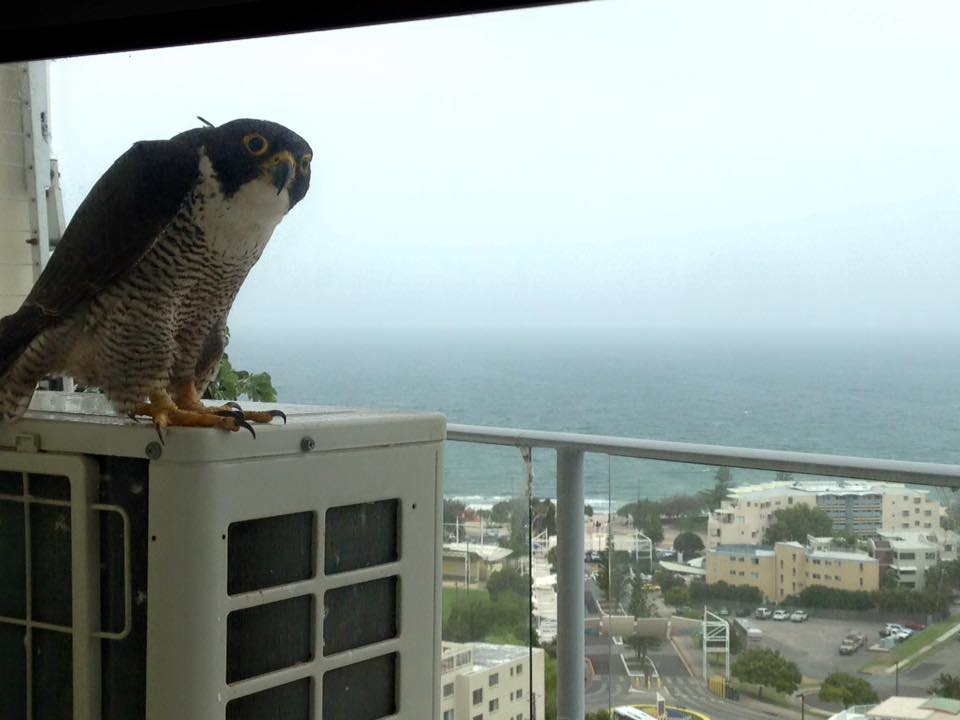 Bericht en foto van Robyn
I could hear them, but not see them! Amazing how the garden grows as soon as they leave. Both Emily and Frederick were playing in the greenery... 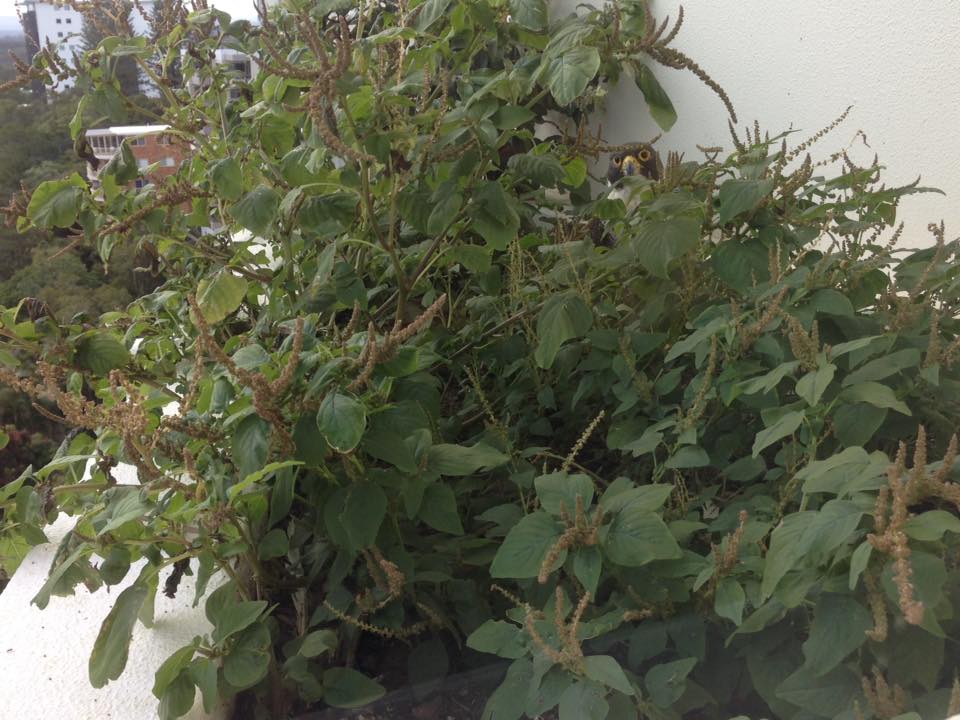 ‎Robyn Hills‎ aan Emily Falcon
4 uur · Sunshine Coast, Queensland, Australië
Update time! There have been new owners moved into some of the apartments and have been frightened by Emily and Frederick defending their site. The result of this is that the Body Corporate covered their usual site with netting to stop them from nesting there. Nature is quite resilient, and they checked out the building and seem to have now selected the furthermost point and height on the building. It's going to be very difficult to get any close photos of what's going on up there! 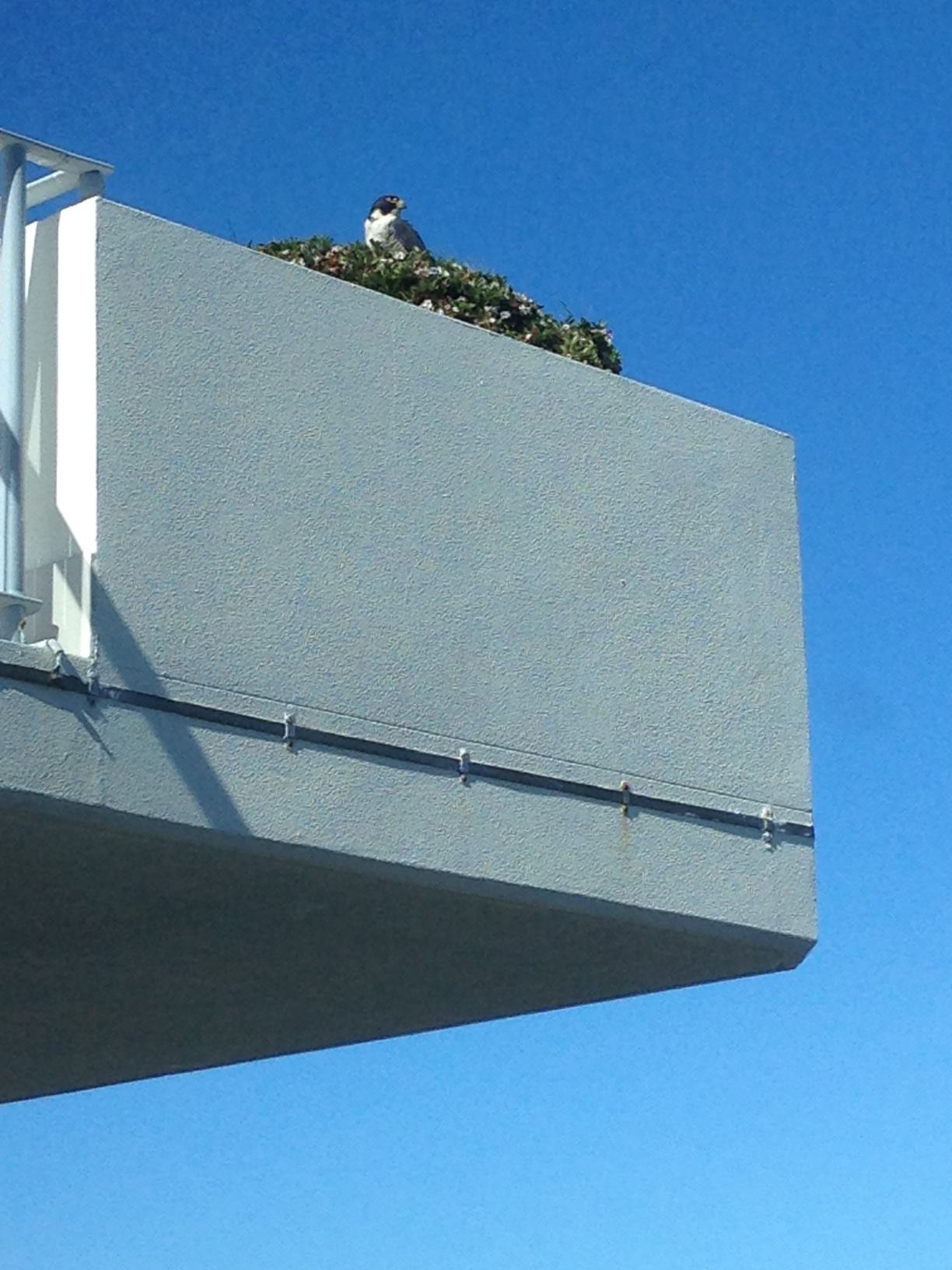 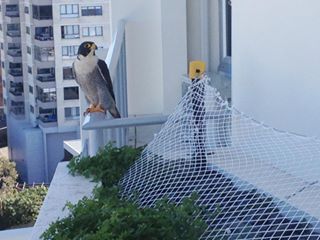 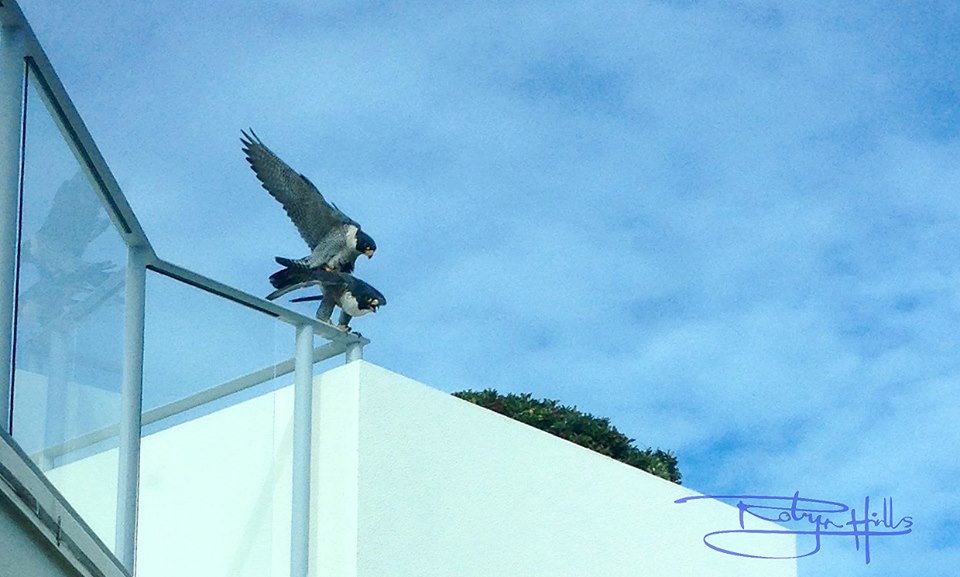 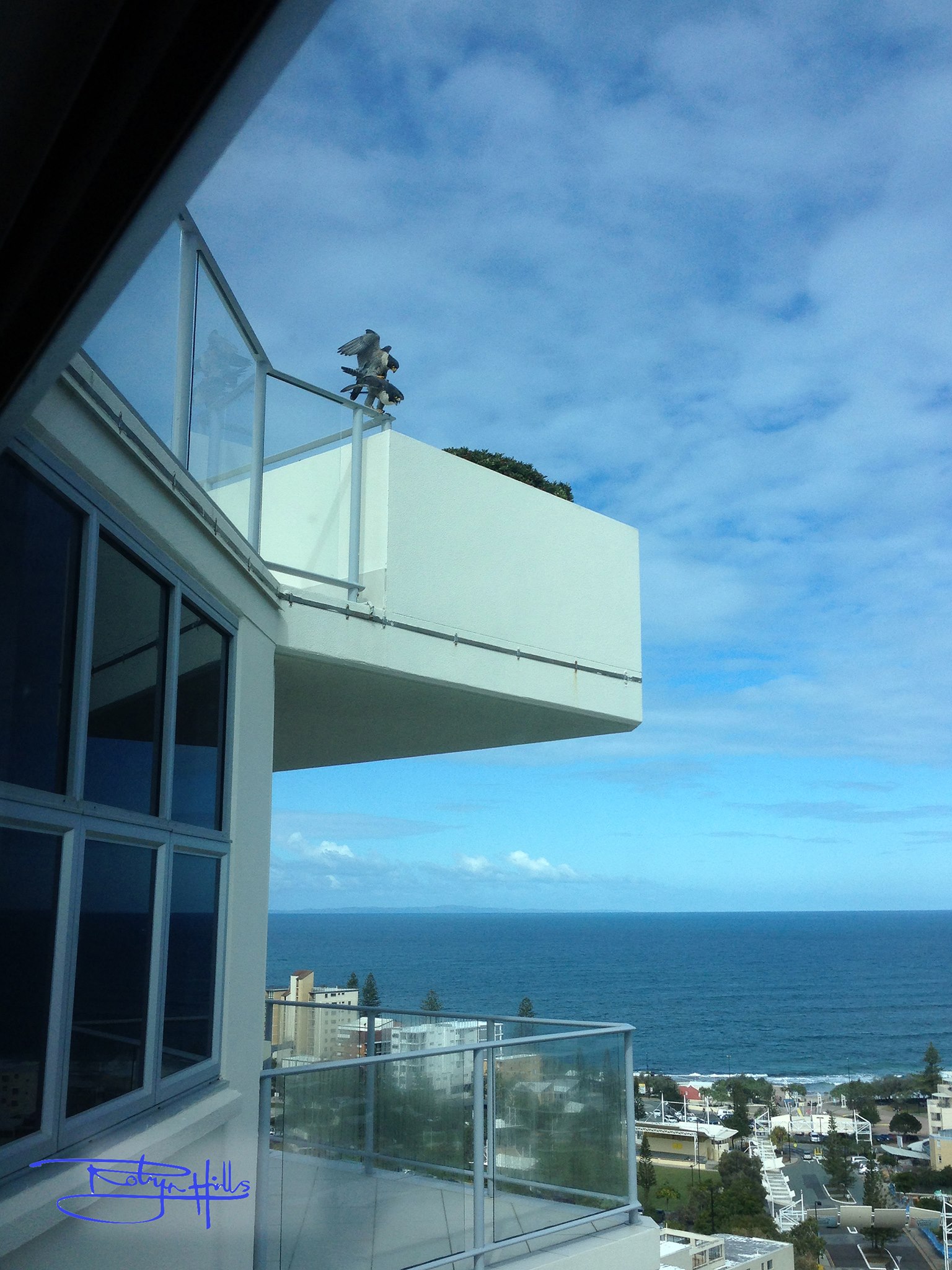 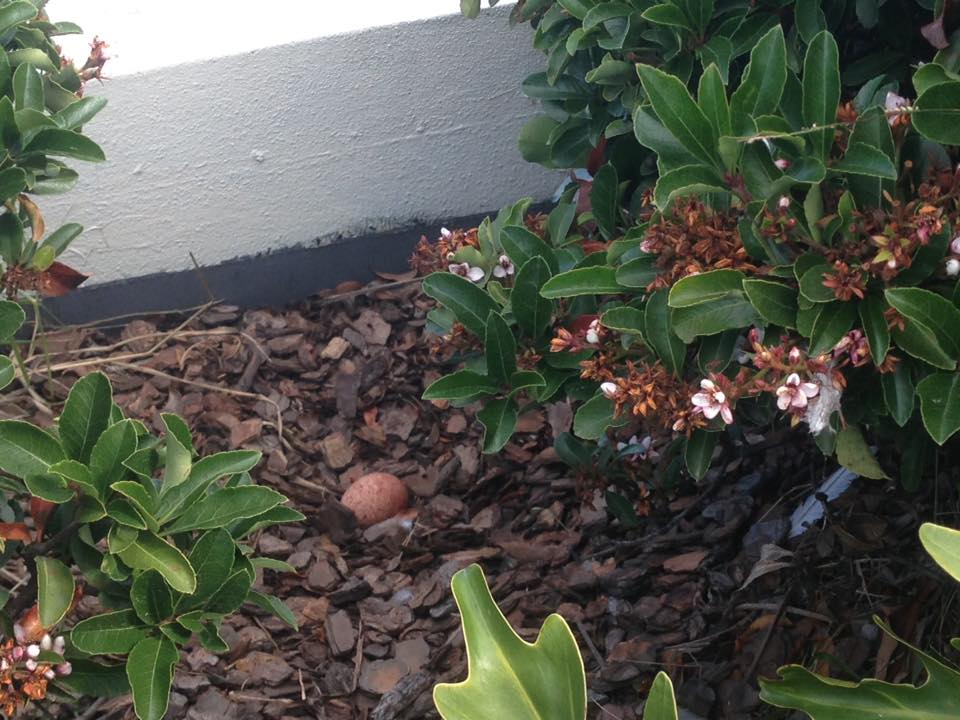 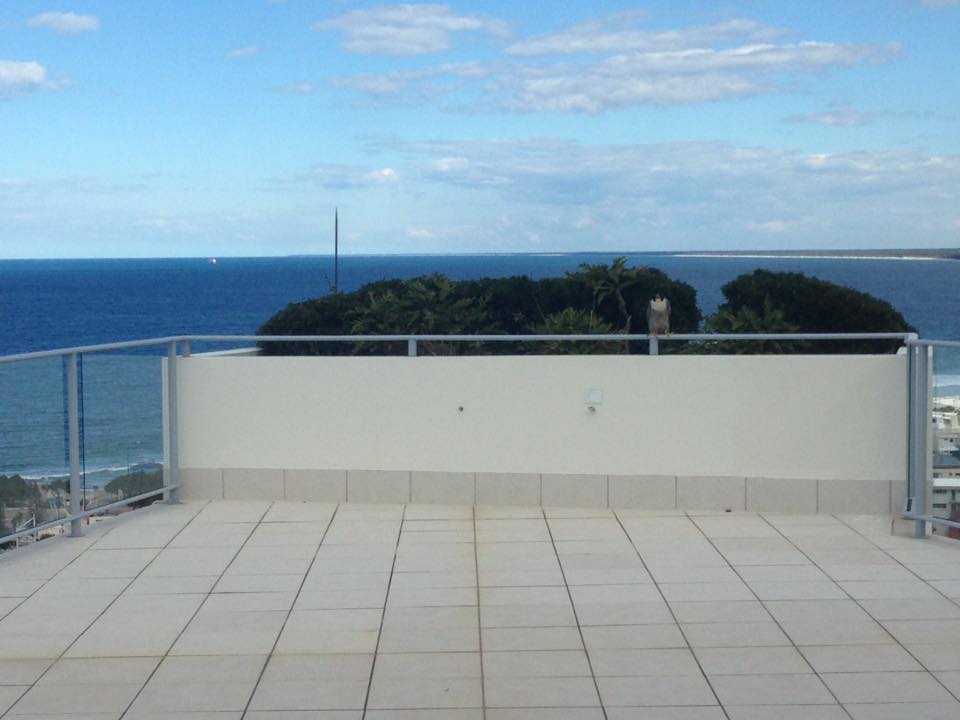 Bericht en foto's van Robyn
Not sure of the exact delivery date, but there's two eggs now. I quite like Emily Falcon's aesthetic eye for selecting a new home - With a view North and South. She let me walk right up to the planter before she complained. Must know me. Oh!! Do you think I've trained a wild bird????

Bericht van Robyn
Confirming there are 3 eggs. Not sure when laid as didn't want to draw attention to them on the weekend.
_________________
Het leven is soms veel te kort,geniet ervan en durf te leven!

Bericht en foto van Robyn.
Confirming 3 chicks. I didn't think Emily was going to budge off them for me to see but then she decided it was better to have a go at me with Frederick's back-up! They looked asleep and cosy.

They're in there somewhere! Underneath the foliage- I could see a glimpse of white, but that's all. Taking cover from a storm last night and beautiful day today at a sunny 25c 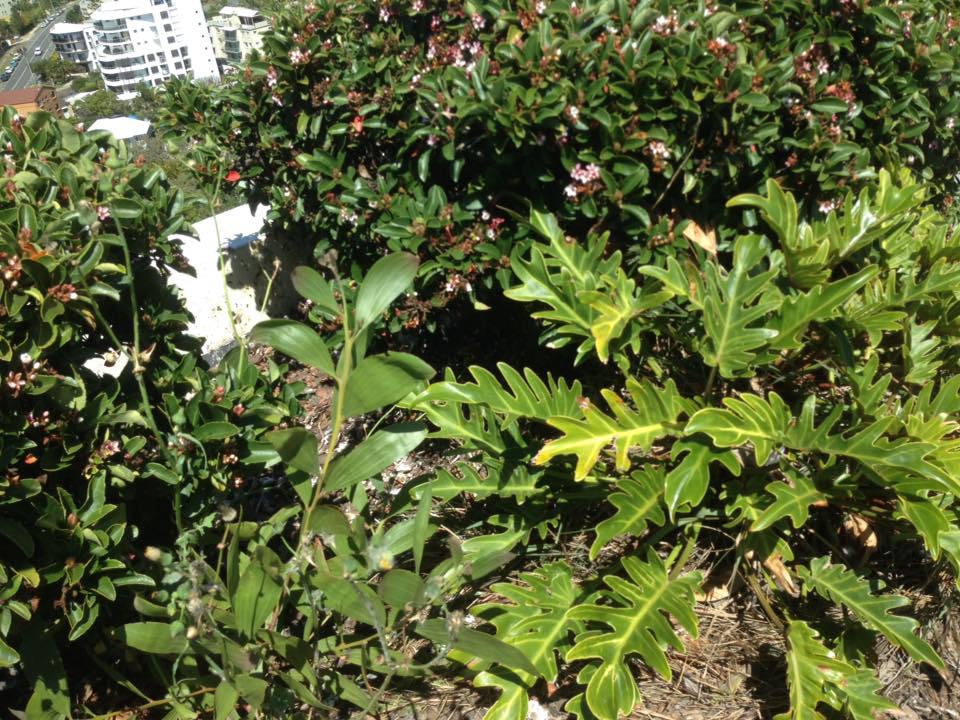 Seems like we missed the cute white fluffy stage! Greetings to a newbie. Emily back on downstairs railing keeping guard. 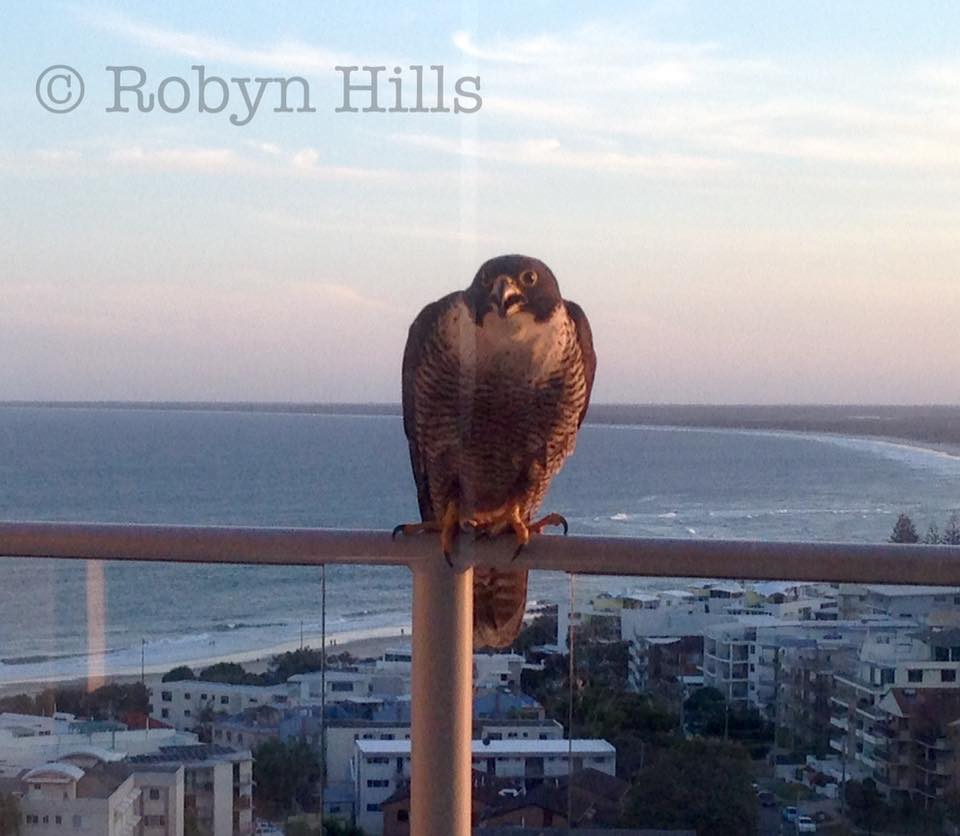 Goodmorning to two of three fledgling peregrine falcons nesting on our roof terrace. With Emily Falcon. One or some have been flying in the last couple days. 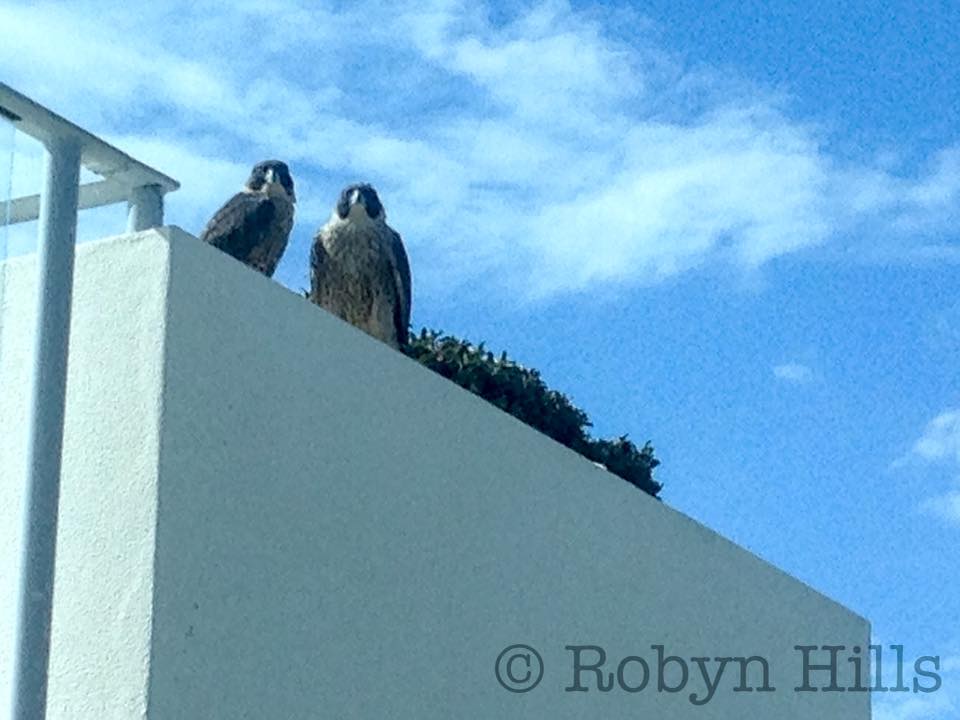 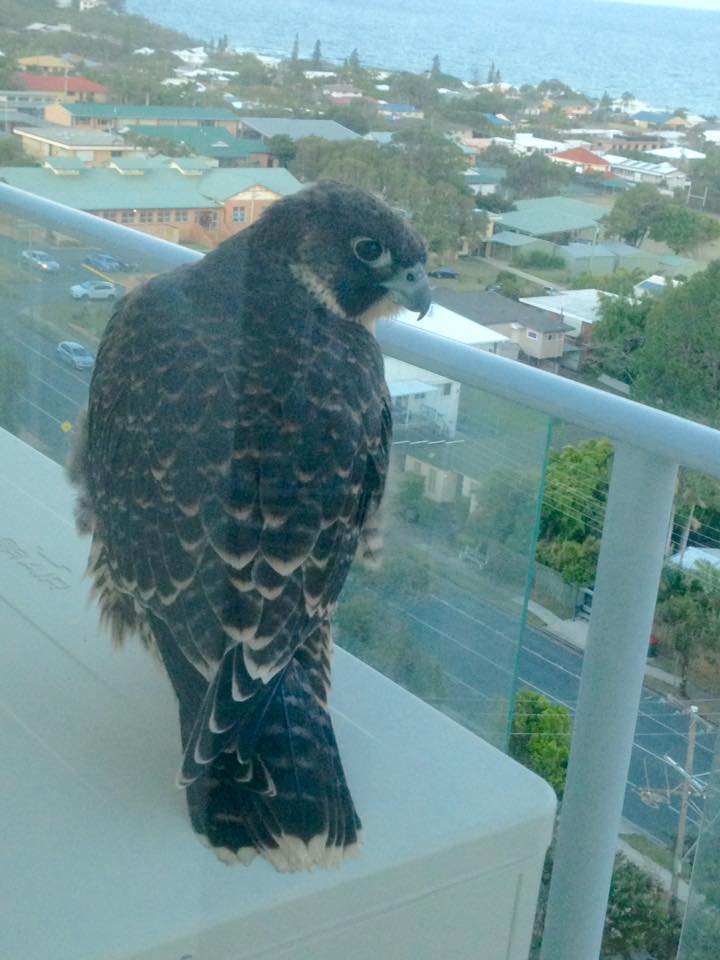 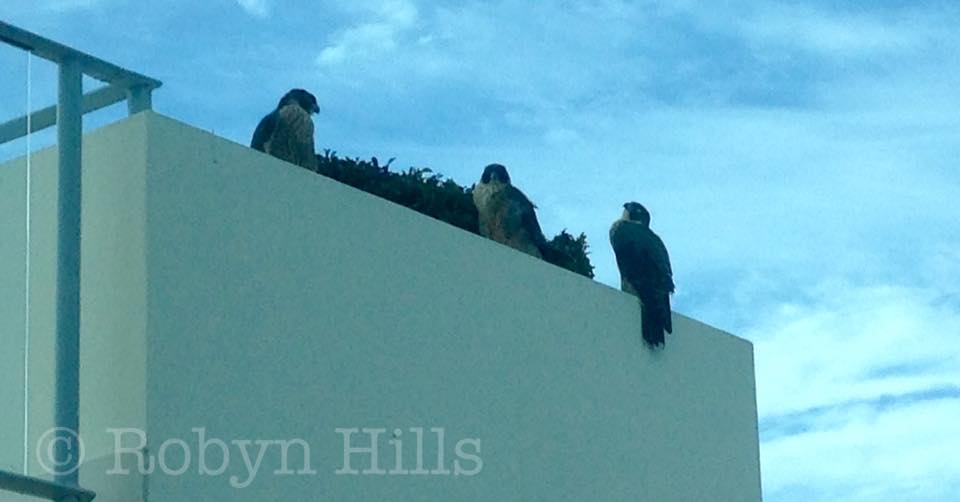 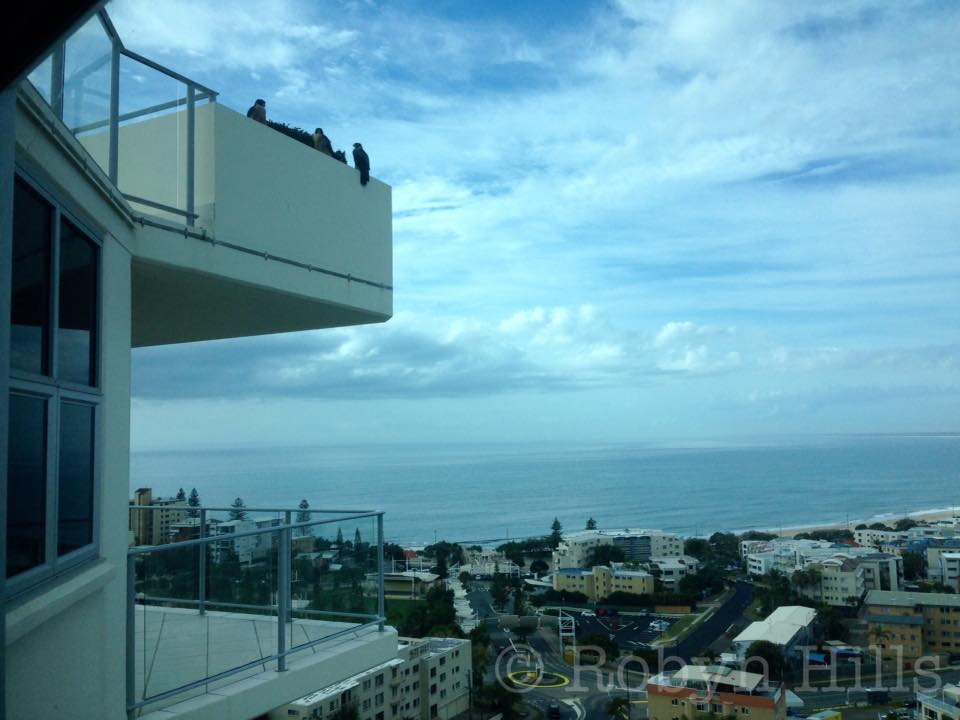 Update van Robyn.
Hello Emily Falcon lovers, I had a lovely photo for you of Emily sitting looking into our window, with the nest site in the background... But, my phone went for a swim this morning, so I'm sorry, I can't post it!
So, the update is.... One of the chicks was reported to the building manager as being on a lower balcony for several days. They phoned Ross Harrison (my handsome husband) and between them, organised for Australia Zoo to come out and see what was up.
They arrived within an hour, and discovered it had a broken wing, so picked it up and took it back to their medical section.
While they were here, we gave them permission to go through upstairs to check the nest site. The other two chicks were there with food from a kill, so seemed to be ok.
Maybe that's what Emily was trying to tell me?! So at least we know that all three chicks are still around.
_________________
Het leven is soms veel te kort,geniet ervan en durf te leven!

Emily Falcon update.
Australia Zoo rang to let the building managers know that the chick didn't make it. There were spinal injuries on top of the broken shoulder bone.
Sorry to be the bearer of bad news. Recovered phone photos, so this is the one I was going to post a couple days ago. Emily sitting looking at in at us, with their nesting site high in the background. 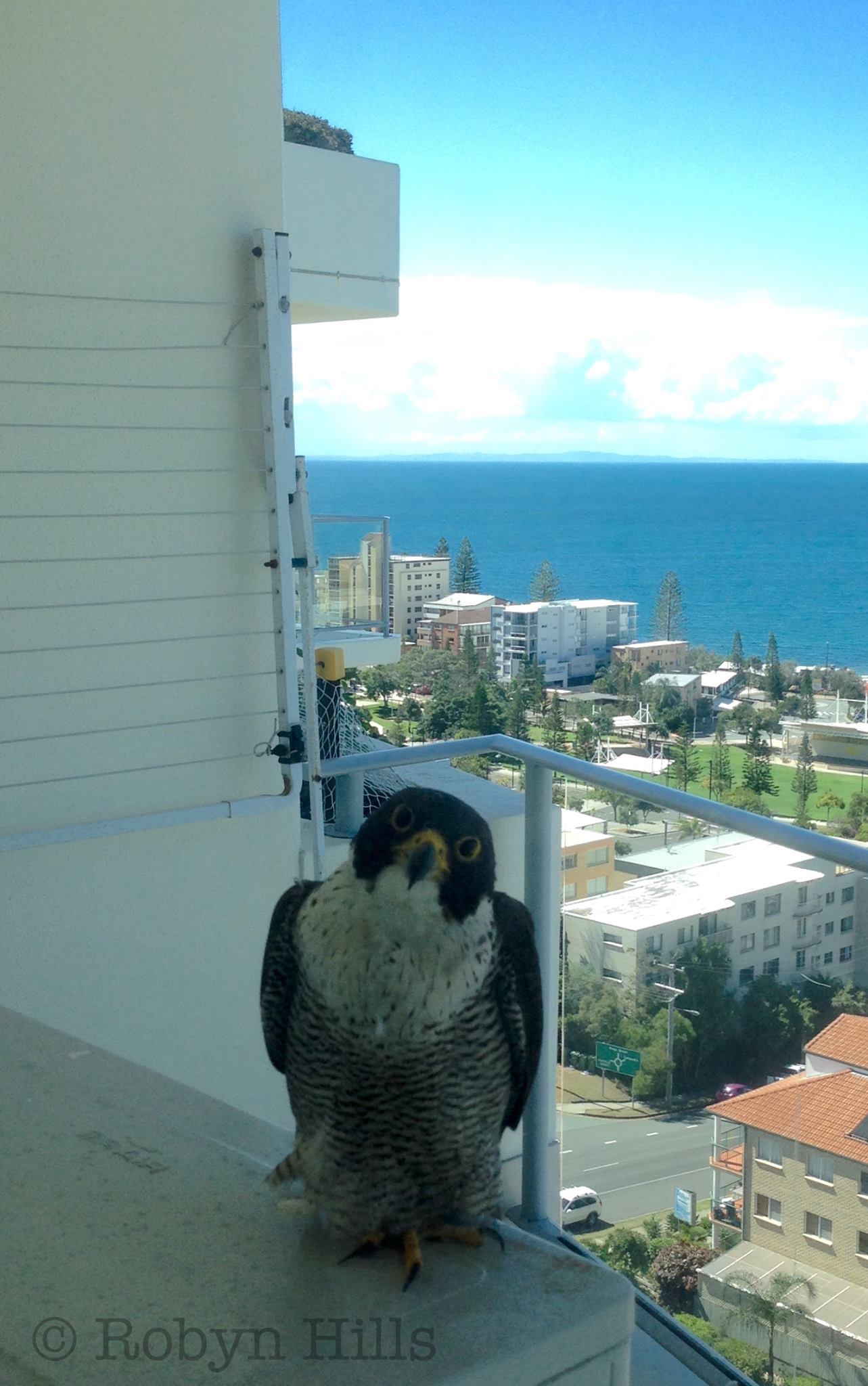 Rescue Robyn! Emily Jnr got herself stuck on the balcony. Was contemplating kitting up in the heavy coat and leather gloves to lift her off the balcony as she was protesting loudly. Went to put a chair out for her to jump up onto and she got such a fright that she squashed through the glass and post and freed herself. Good result. 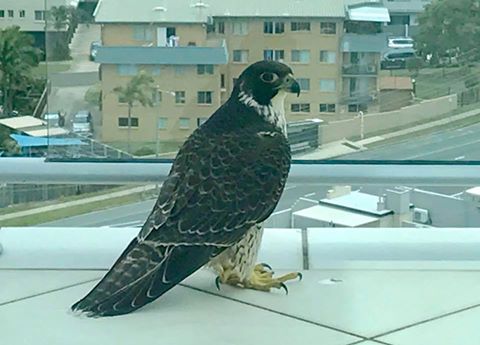 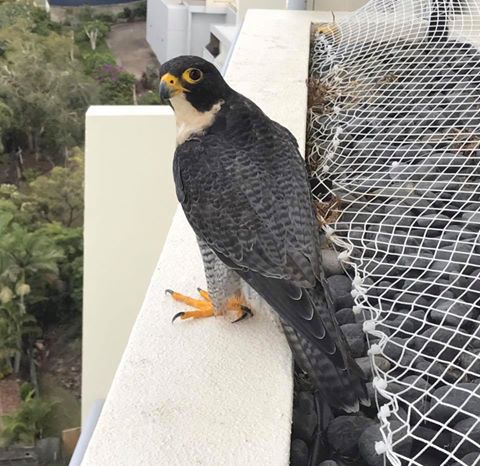 Robyn Hills here. Long post alert!
Thanks for your patience everyone, and for your support.
Rules of Engagement for this page - please be mindful to make helpful suggestions and comments.
About six weeks ago, we asked for help with suggestions and ideas about being able to live harmoniously with our neighbours and the peregrine falcons. We received loads of help and connections from around the world and locally. Thank you all.
There was a meeting on the weekend of the concerned parties.
On cue, Emily appeared minutes beforehand to check on proceedings!
Several of the building unit owners are still very much against having the falcons continue to nest on the building, as it affects their balconies with debris, leftover meals and droppings, which I understand is not pleasant. People are also concerned about theirs and their children's safety during breeding season.
Apart from the obvious that they are protected by law, it is still a matter of doing our best to compromise so that there is as little animosity as possible between the dwellers.
It was agreed that we could have a new nesting box. The experts advice is that the planters boxes need to be covered to discourage nesting there, and hopefully pointing them in the right direction to the dedicated box. This will be placed on the highest roof, facing away from the open balconies, in an attempt to minimise the impact of the falcons on the residents.
Need to get some engineering and designs, and get it built and up, in plenty of time for nesting season.
I know that they may reject the nesting box, but it was a compromise I offered to help both parties.
It was quite confronting for me to be labelled an 'Animal Lover' (said with the venom of a snake!) but I have to stand up for what I believe in and do what I think is the right thing to do. As nature cannot speak for itself, I've elected to be their voice. Possibly that's why they chose our balcony in the first place!